Was it a storm? Yes, it was. But it was no normal storm. It was a dusty storm. The skies were red, too. A young girl was shielding her face, keeping the dust out of her eyes as she continued to approach a strange woman.

"What am I doing here?" The girl shouted over the storm, hoping the woman would hear. "Tell me, because I know you have something to do with this!"

The woman responded in a fairly normal voice, it was a wonder that the girl could hear her.

"They have taken you from the Imperial City's prison, first by carriage and now by boat. To the East, to Morrowind. Fear not for I am watchful."

The storm was now even worse than it was before.

The girl thought she saw a hint of a smile on the woman's face.

"Because you have been chosen."

I felt the need to take a deep breath and take a look at my surroundings. A boat. Of course. I had been told they were transporting me elsewhere.

A older Dunmer man in front of me coughed, before opening his mouth to speak. He had obviously been the one to wake me. 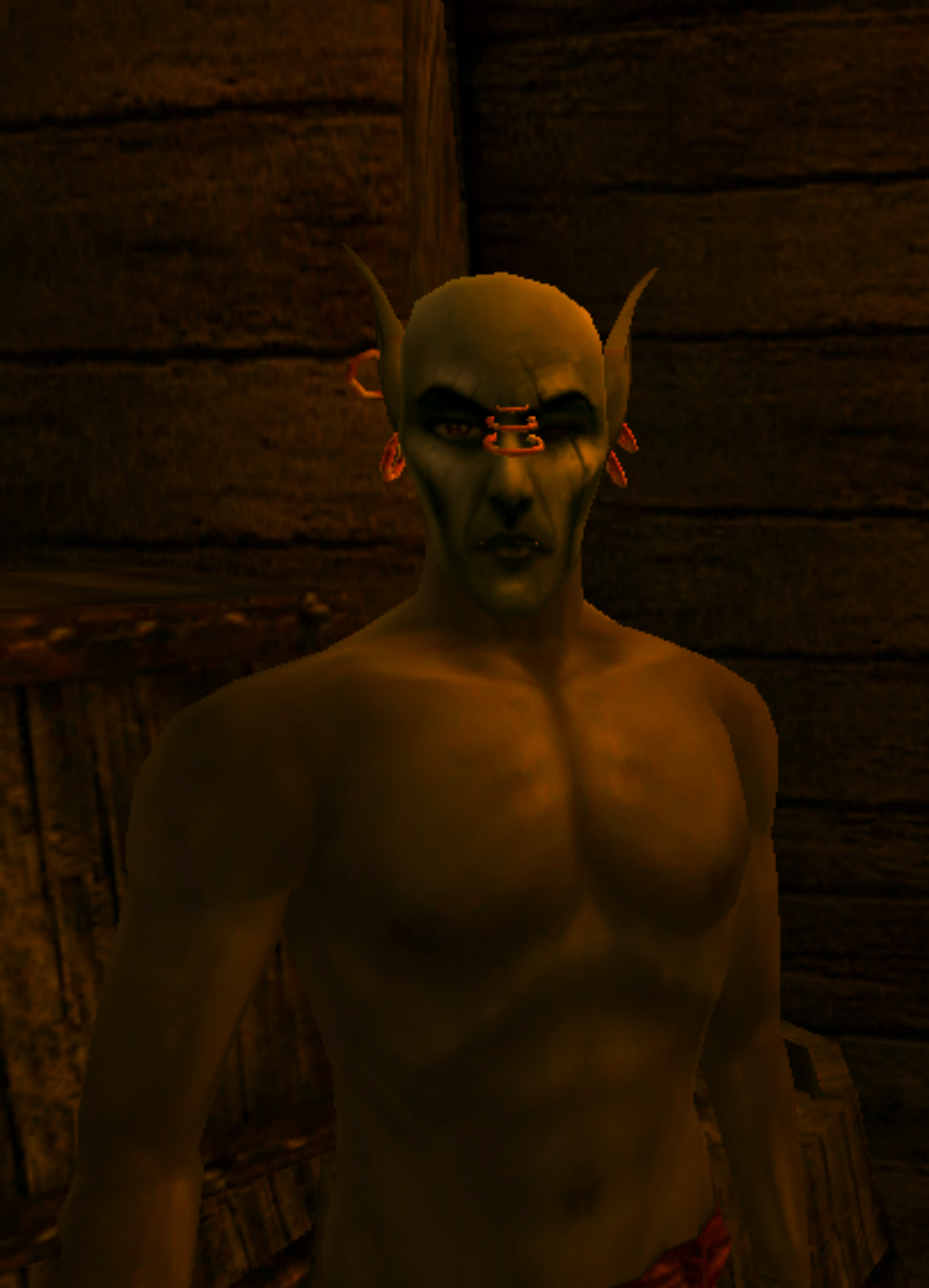 "Stand up," he instructed. I didn't so he took a hold of one of my arms and pulled me up. "There you go."

Almost unconsciously, I placed a hand on my forehead.

"What happened?" I asked.

"You were dreaming," the Dunmer said simply. "What's your name?"

"Jiub," the elf responded. "Not even last night's storm could wake you, you know. I heard them say we've reached Morrowind. I'm sure they'll let us go."

That was when I felt myself blanch. Morrowind?

Morrowind was homeland of the Dunmer, the homeland of my ancestors. My mother and father had once lived in Morrowind, but I had never seen it. Not once.

And now I was here, and I would probably be locked up again.

"We'd better quiet," Jiub said afterwhile. "I think I can hear the guards."

I fell silent, and sure enough, I heard the sounds of clanking metal against the wooden floor. A guard saw me and smiled.

"This is where you get off, so come along with me," he said nodding in my direction. Jiub didn't say anything, but gestured towards the guard. Slowly, I followed him off the ship, closing the trapdoor behind me.

"This is where they want you. Head down to the dock and he'll show you to the Census Office," the guard said, but I barely heard him. I was taking in the surroundings.

Morrowind or not, it was beautiful place. In some ways it was even prettier than Cheydinhal, where we lived before the Imperial City.

That's when I felt a slight pang when I remembered my family - especially my sister, Eriama. It was sort of place she would have loved. 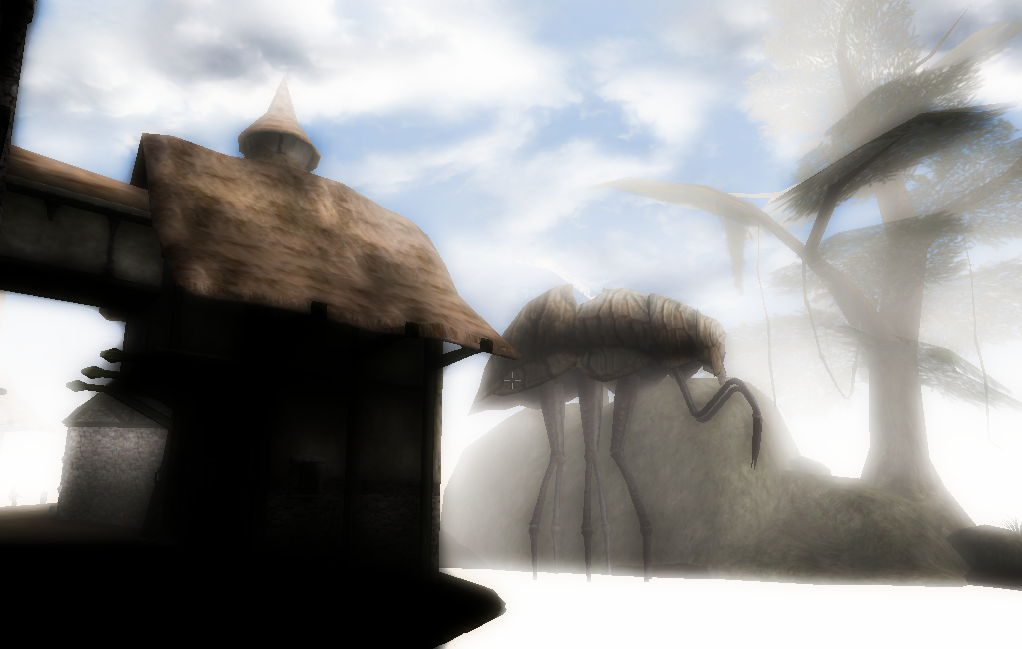 Now I wouldn't see her again.

"Did you hear me, Dark Elf?" the guard snapped. "Move down to the Census Office."

That was when I came back to Nirn and was shoved into the building up ahead.

The Census office reminded me strangely of my father's office back home, except with Imperial decor.

"Greetings," I heard a voice say. "Come over here."

Obviously, he was speaking to me, so I turned towards him and sat down at the desk.

The man gave me a look.

"I am Socucius Ergalla, and I am in charge of the Census Office here in Morrowind," he told me. "Now, before I can release you -"

I felt my heart skip a beat. "You're releasing me?"

No more jail, no more terrible comments from Dreth, no more Guards referring to me as Criminal Scum...

"Well, yes," Socucius replied sourly. "You're being released by the order of Emperor Uriel himself. No one understands why, but that's just that."

Emperor Uriel Septim...Why would the Emperor, of all people, order my release?

"Now, before we can release you, you will need to be recorded." Socucius continued dryly. "We already know your name and age, but I was told you were born under a certain sign. What would that be?" 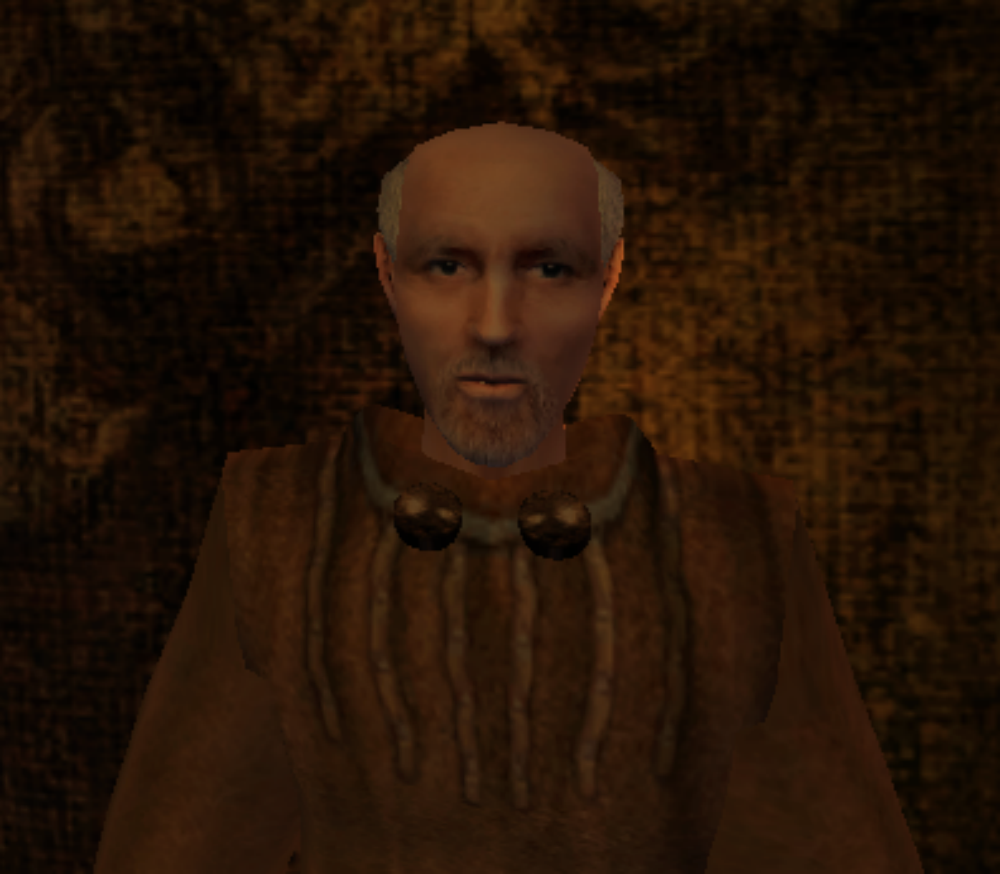 "The Mage," I said quickly.

"Ah, I see…" Socucius said, nodding his head. "And what was your occupation before you were arrested?"

I was stunned. "My occupation?"

"I know what it means," I responded sharply. Perhaps too sharply. "I didn't do anything of any importance, really."

"Well, you'd better find out, Dark Elf," Socucius said. "Morrowind is a difficult place to live. Knowing who you are makes it a little easier."

He then stamped a piece of paper and handed it to me.

"These are your release forms, Therayn," he said. "Now take them to the Captain before you leave, so you can be officially released."

I took the paper, and went out of another door. On the floor outside the office was a ring. I picked it up. Someone had obviously lost it.

The Captain was in the building over from the one I left, sipping something from a tankard at his desk until I entered the room. He saw me and raised his eyebrows, as if expecting me to speak.

He nodded. "These are for you," I said, handing him the release papers. The captain took them and read the quickly.

"Word of your arrival only reached me yesterday," he began. I then realized this was the first time the Captain had spoken a word. I didn't say anything back.

"I am Sellus Gravius," he continued. "But my background is not important. I'm here to welcome you to Morrowind."

Sellus gave me a look of disdain.

"I don't know why you're here, Ulina," he replied, speaking my name cautiously. "Or why you were released from prison and shipped here. But your authorization comes directly from Emperor Uriel Septim VII himself. And I don't need to know any more than that."

I wanted to ask more question as to why I was here, as someone around here was sure to know. But even the Captain - Sellus - had admitted he didn't have a clue.

"When you leave this office, you are a free woman," Sellus said. "But before you go, I have instructions on your duties. Instructions from the Emperor. So pay careful attention."

Sellus frowned, so I quickly added "sir" at the end of my sentence. He pulled out a brown parcel wrapped in brown paper, with white string holding it together and handed it to me. He also gave me a small coin purse with some gold in.

"This package came with the news of your arrival and the gold is for expenses," he explained. "You are to take the package to Caius Cosades, in the town of Balmora. Go to the South Wall Cornerclub, and ask for Caius Cosades - they'll know where to find him."

"Who's Caius Cosades?" I asked.

Sellus smiled grimly. "You are to be his charge. Serve him as you would serve the Emperor himself."

Serve him as you would serve the Emperor himself. I felt the urge to shake.

"I also have a letter for you, and a disbursal to your name," Sellus concluded. He then handed me a letter with my name on the outside of it. I stuffed it into my pocket.

"Certainly. But be quick."

"Can you tell me where Balmora is?" I asked.

Sellus handed me a map of Morrowind - more precisely, the district of Vvardenfell.

"You can keep that map if you wish," Sellus began dismissively. "Balmora is north of Seyda Neen. The road passes Pelagiad village and Fort Pelagiad, crosses a deep ravine, passes Fort Moonmoth, then turns west across the Odai River and into Balmora. The South Wall cornerclub is in southeast Balmora, on the east side of the river."

I felt myself scowl. The direction were rather vague for a newcomer to the area. Sellus obviously had an idea of what I was thinking, because he said, "for more detailed directions, talk to Elone the Scout at Arrille's Tradehouse here in Seyda Neen. But take my advice…"

I raised my eyebrows. "What is your advice, sir?"

"You're new here. Take the silt strider to Balmora instead," he answered. "Fast, cheap, safe. Cross the bridge and head east. Can't miss it. But if you are taking the silt strider, I'd hurry. The next one leaves in a couple of hours."

When I walked out the door, I sat on a bench and opened the letter I was given.

You have been given these directions and a package of documents. Do not show them to anyone. Do not attempt to read the documents in the package. The package has been sealed, and your tampering will be discovered and punished.

Proceed to the town of Balmora in Vvardenfell District. Report to a man named Caius Cosades. He will be your superior and patron; you will follow his orders. His residence is not known, but ask at the cornerclub called "South Wall". People there will know where to find Caius Cosades. When you report to Caius Cosades, deliver the package of documents to him, and wait for further orders.

Remember. You owe your life and freedom to the Emperor. Serve him well, and you will be rewarded. Betray him, and you will suffer the fate of all traitors.

I have the Honor to prepare this at the direction of his Most Sovereign Majesty the Emperor Uriel Septim,

Personal Secretary to the Emperor.

But why did I owe my life to the Emperor? I had never met him once, and he had ordered my release. I felt terrible that I owed my freedom - my life - to a man I had never met.

I was nothing special.

I heard a voice and I quickly put the letter away to see a Wood Elf grinning at me. "Are you the one that boat dropped off?"

"I'm Fargoth," he said. "I have to say it's odd to see a boat arrive at that time of the day...Hope the Imperials treated you okay."

"It was alright, I suppose," I replied.

Fargoth shook his head. "I swear they took my ring..." 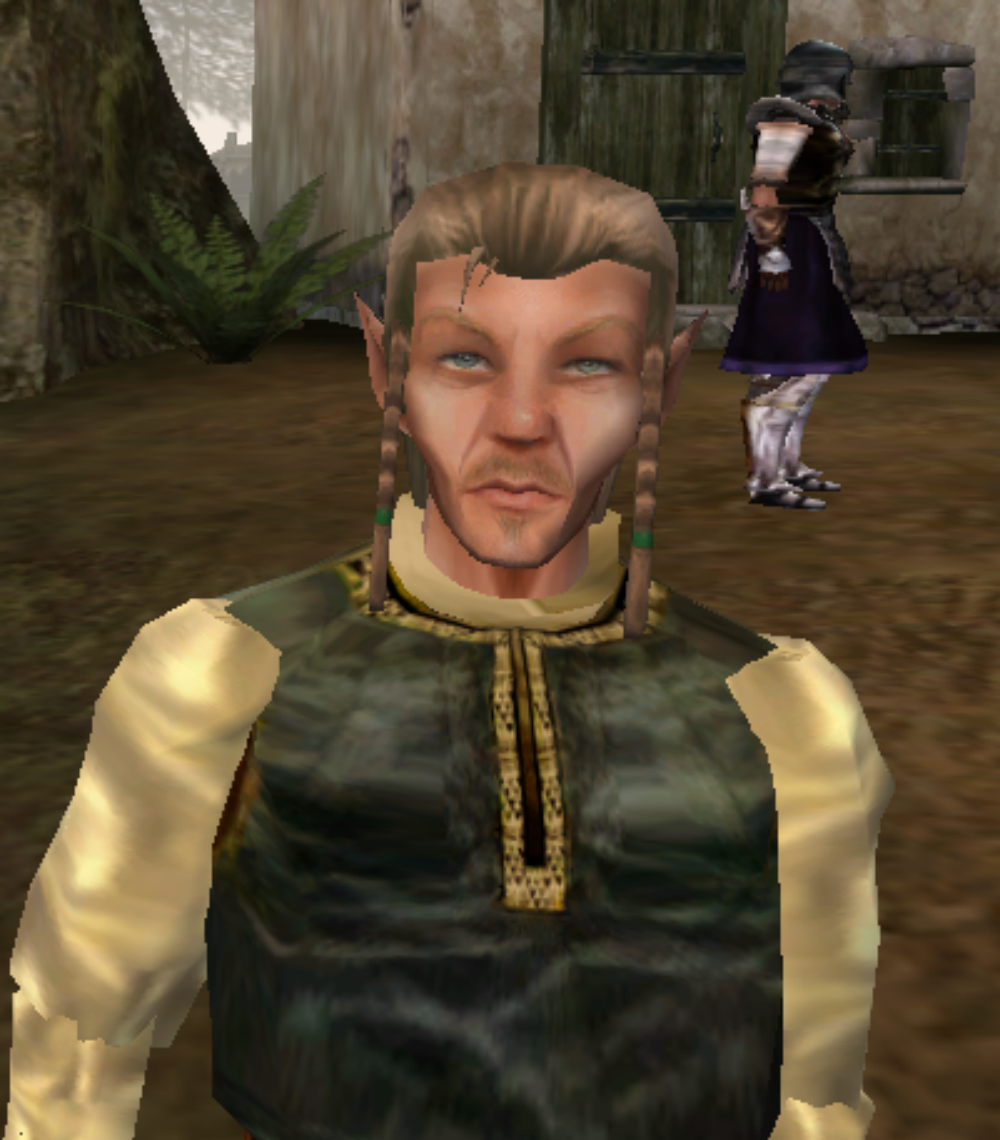 "Thank you, Ulina," Fargoth cried. He then ran off and began chatting with his friends. 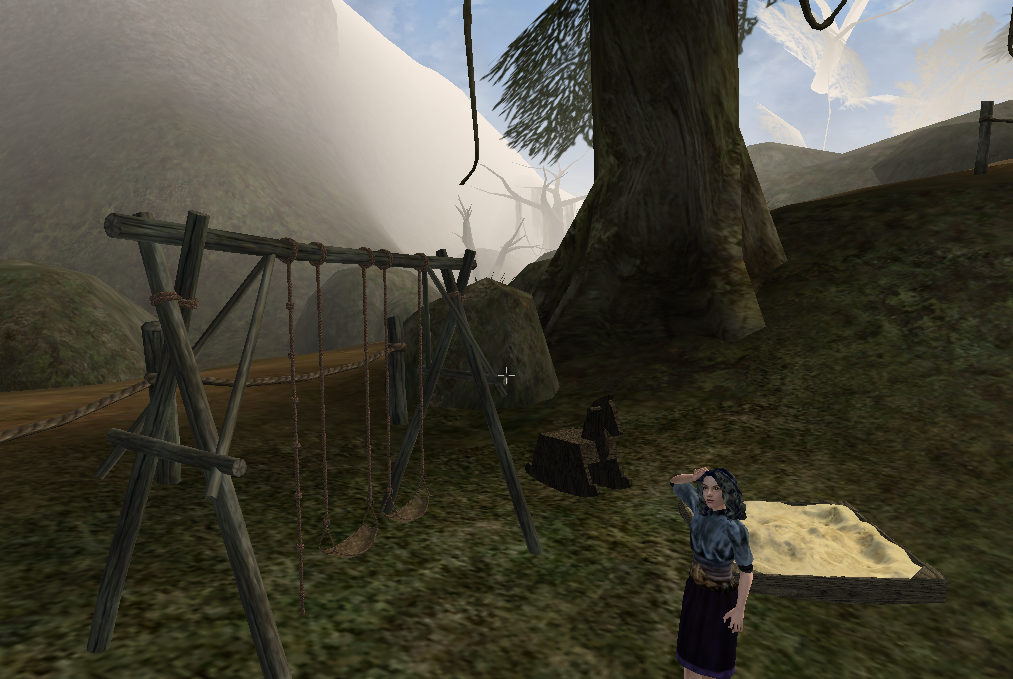 The Silt Strider wouldn't leave for Balmora for the next few hours, so most of the time I spent waiting I stayed outside and admired the gorgeous - yet rather alien - scenery. Villagers sat outside chatting, children played with wooden swords or in the playground near the docking bay. I sat on one of the unoccupied swings and decided to wait for the Silt Strider to Balmora.