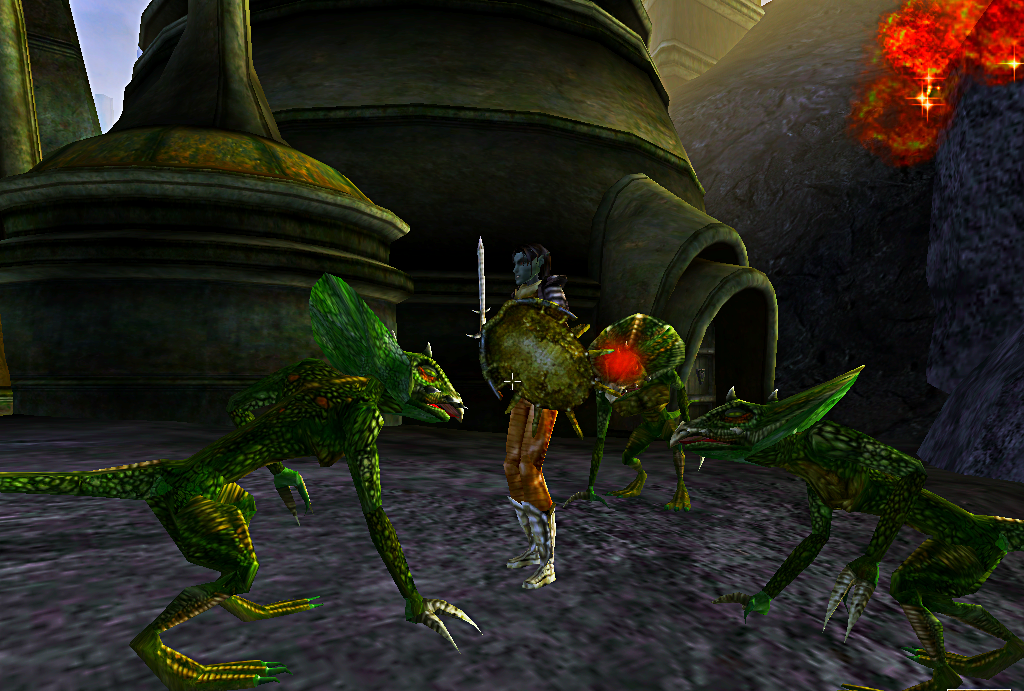 The Clannfears were attempting to bite him, I think. Scratch him with those long claws they had. I don't know. Either way, I knew what I had to do.

I had to help him.

I took out my new sword and hit the first Clannfear from behind. Then, the second one caught on and started to try and attack me.

The girl grinned at her father as he held the ancient family sword and showed her how to swing. How to avoid her enemies…

Remembering my father, I ducked when the Clannfear tried to hit me and struck it's head. The third one was almost finished. The young Dunmer boy finished this one, before finally coughing and then turn to face me.

He was beautiful, despite his terrible wounds. I had never described a complete stranger with this word before, but I couldn't help it. Despite how beautiful I thought he looked, however, he was angry with me. Not that he had good reason to be.

"Greetings, Outlander," he began grimly. "I suppose I should thank you for your help with those Clannfears, although I never asked for it."

Suddenly, I was filled with rage..

"I just saved your life!" I cried. "Look at your wounds! By the Gods…"

When I didn't answer, he continued.

"I'll have you know I was just playing with them to train my skills," he said. "Then you came blundering along playing the hero and ruined it for me. Next time, keep out of it!"

I felt like burying my head into my hands at the boy's stupidity.

"Like I said, I just saved your life," I said coldly, surprising myself. "I suppose you're always this ungrateful towards - what did you call me? - Outlanders."

The boy was bleeding before, but now his wounds started to grow worse. I had a few potions I had bought in Balmora that might be able to help him, but not yet. Perhaps he didn't deserve them.

"Well, I suppose you won't want healing either, since you're clearly very busy training in Bleeding to Death?" I quipped.

"No, I see you can handle everything by yourself, am I right?"

I was about to turned around and leave him to bleed, but I heard him cry out.

"Want to tell me more about what a terrible person I am? I've gotten nothing but that since I arrived here."

"No!" He snapped."I want to apologize. You probably saved my life."

I rolled my eyes. "Probably?"

"Alright, you definitely saved my life!" the boy cried. "Are you happy now?"

The shout was so loud it probably caused all the Cliffracers to fly away.

That was when I moved closer and shoved a potion into his hands without a word. The boy gulped it down.

"I feel much better," he admitted afterwards. "Thank you."

I sighed. "You're welcome."

"This whole thing is very embarrassing," he admitted.

I narrowed my eyes. "Why would me helping you be embarrassing?" It didn't make much sense to me at all.

The boy buried his head in his face. "I am trying to become a warrior, but it seems I still have a long way to go. I am supposed to be a great warrior. It's expected of me. But I spend all my time training and I'm obviously still not good enough."

The boy looked sadden and I suddenly felt sympathy for him. I was being expected to do work for the Blades, an organization that worked for the Empire. I hadn't asked for it, but it was still expected of me.

The boy let out a moan of frustration.

"What would my tribe think of me if they knew I'd been rescued by an Outlander? I mean an Outlander, for Azura's sake," he said. He then gave me a quick look. "No offense, of course."

"None taken," I replied. That time, I didn't see any reason to be offended. "Besides, there were three of those damned things. I don't think one person could have handled them alone."

I looked at the boy after I said those words and - as stupid as it was - flashed him a smirk.

"Thank you, but you don't understand…" his voice trailed off. "How could you? You have no idea who I am or what I have to do and why."

I sat down on the dusty ground beside him.

"So tell me," I said. "Besides, you still aren't fully healed. I think I can do my best to help while you tell your story."

The boy smiled. "I think I'd like that. But first, why don't you tell me your name."

I suddenly realized we hadn't really introduced ourselves.

"My name is Julan Kaushibael."

Julan told me about how he grew up as an Ashlander, about his mother and about his sacred mission at the Ghostgate. When he got to the Sacred Mission part, I was lost. Why would a mother send her own child - capable Julan may be - on what seemed to be a suicide mission? Maybe I just wasn't understanding something, but this outraged me.

When I expressed these views, however, Julan sighed and shook his head.

"It's not something I'm free to discuss and certainly not with Outlanders," he said. "All I will say is that I have a sacred mission I need to carry out within Ghostfence on behalf of my tribe—and others. But I've been training for a week now and I can't even deal with monsters on this side of the fence. How can I hope to survive if I go inside?"

"Can I ask you something, Ulina?" he began. I nodded. "You're obviously as stronger warrior than I am...do you ever adventure inside the Ghostgate?"

I stared at the glowing walls that were in front of us.

"I was wondering if you'd be willing to train me," he continued.

That was when my mind started spinning in circles. Me, a trainer? I was a terrible teacher. Giving instructions to people was horrible.

But I needed something to do before Caius needed me again.

"If my people knew, they would be horrified, but I can't see any other way." Julan added. "I'm just not getting anywhere training by myself. I need guidance and you seem capable of giving it to me."

I coughed. "You really think so?"

"Of course," Julan said simply. "Outlander or not, you're the only person I've met so far who has helped me and perhaps that means something."

I opened my mouth to speak, but found I couldn't continue.

"And it's not as if I'd be a useless companion—I think I'd be a useful ally," Julan said.

I thought about it for a moment. One the one hand, my short time in Morrowind has been very lonely. It would be nice for some companionship. On the other hand, Caius wouldn't appreciate if I told Julan about my affiliation with the Blades. It was supposed to be a secret.

I smiled and nodded.

"I don't know how good a teacher I'll be exactly," I admitted. "In my experience, I'm a horrible teacher, actually. But you can tag along if you want."

Julan's eyes lit up as if they were torches.

"Great!" He said. "But since we're here, can we try going into the Ghostgate?" I frowned. "Not all the way in, just slightly," he added after seeing the look on my face.

I relented; we decided to travel into the Ghostgate. But after a few steps in, Julan called my name and I turned around.

"Is something wrong?" I asked.

"Ulina, I'm sorry. I thought I was ready to travel on Red Mountain, but I'm not," Julan said. "I know I'll have to come here, but I just can't. Not yet, not now. Please let's just get out of here."

That was when he grabbed ahold of my arm and the two of us ended up in Ald-ruhn. He had recalled us there. Seeing as I had never used a recall spell before (they had been banned in Cyrodiil), I didn't know what to expect.

What happened was that I fell into Julan's arms when we arrived. It felt strange to feel that close to him, to feel the heat of his body…

"I...I'm sorry about what happened back there, Ulina," Julan said. "Gods, you must think me an utter coward. But I swear this to you; I am a warrior. I have never run from a fight and I do not fear death. I'm not afraid of the ash monsters on Red Mountain, its something else hard to explain...I think it has to do with these strange visions I've been having."

Strange visions? I suddenly thought back to the day I arrived in Vvardenfell. I had a strange dream then too, before Jiub woke me.

"I often dream that I'm climbing Red Mountain and its dark and the air is filled with ash, getting into my eyes and mouth and it gets harder and harder to keep moving," Julan revealed with a dark tone of voice. "And there are all these voices surrounding me, whispering things…"

Without thinking, I took ahold of his hand.

"Come on," I said. "I have a room at the Ald Skar inn. We can talk more there. Tomorrow, we can talk about your training."

That was when we headed for the inn, waiting for tomorrow.