Two weeks later, Caius gave me another job. Going to Vivec city and interviewing some informants.

"The Nerevarine and the Sixth House," Caius answered.

Why did I even bother to ask?

"It has to be done in that particular order?" I asked him with a smirk. I couldn't help it. His directions were so precise.

Caius scoffed, before handing me a folded piece of paper and a coinpurse. "Of course they don't."

"Here," Caius said. "I've written the details down, so you won't forget. And here are 200 drakes. For bribes and other expenses," he finished hastily once he saw the look on my face.

Once we were finished with that conversation, I left his house to see Julan sitting on the bottom step, reading a book. He put it down once he saw that I had arrived. I sat beside him and told him where we were going and part of what I was doing there.

"We're going to Vivec?" Julan asked. I nodded. "Great! I heard that city was really beautiful...though hard to navigate…"

We set off the next day, taking the Silt Strider and arriving no less than an hour later. In front of the entrance of the city, there were children playing along the roads and practising archery. Julan and I kept moving on ahead towards the city.

Vivec was a large city with nine districts on artificially made islands. The first one was the Foreign Quarter, and I soon knew it was the friendliest place for Outlanders in Vivec - if not in all of Vvardenfell. In the upper Waistworks, me and Julan found the Black Shalk Cornerclub, where an Argonian was having a rather intense argument with three Dunmer.

"You are looking for Huleeya, yes?" a voice behind me said. I turned around. It was the barman.

"Please," the barman looked desperate, "He's over there…" he nodded towards the Argonian, "...do what you can for him. I just need this argument to be stopped! It drives away potential customers, you see…"

But I was no longer listening. I was moving over to Huleeya, who looked more than a bit annoyed.

"...filthy lizards like you shouldn't be allowed to run free," one of the Dunmer snapped. "It's an absolute disgrace!"

Julan looked furious. "Can I please punch him? Seriously…"

I held up a hand.

"We're not here to start a town brawl," I told Julan pointedly, even though I secretly thought the Dunmer terrorizing Huleeya deserved it. "Come on."

The three Dunmer looked up and saw us, their expressions absolutely livid.

"Well, look here," one of them sneered, "Ashlander trash and an Outlander! More people who shouldn't be here."

"And what is she, your girlfriend?" Another demanded, before the three burst into hoots of laughter again. I felt the blood drain from my face. Julan made a start towards them, but I placed an arm in front of him.

"We need to talk to Huleeya," I snapped. "And that means you can get out of here. Now!"

"And why would you want to talk to a filthy lizard like him?" The largest and oldest Dunmer asked. I glared at him, but took out some gold and handed it to him. "Is this enough to change your mind?" I asked. He rolled his eyes.

"Fine, Outlander," he barked. "This will do. Come on, boys! This lizard ain't worth our time!"

With that, the three Dunmer left the inn. I thought I heard the bartender mutter "snakes" under his breath. They sure seem to be like snakes, I thought angrily. That was when Julan tapped me on the shoulder and we went to Huleeya, who looked as if he was nursing an injury. 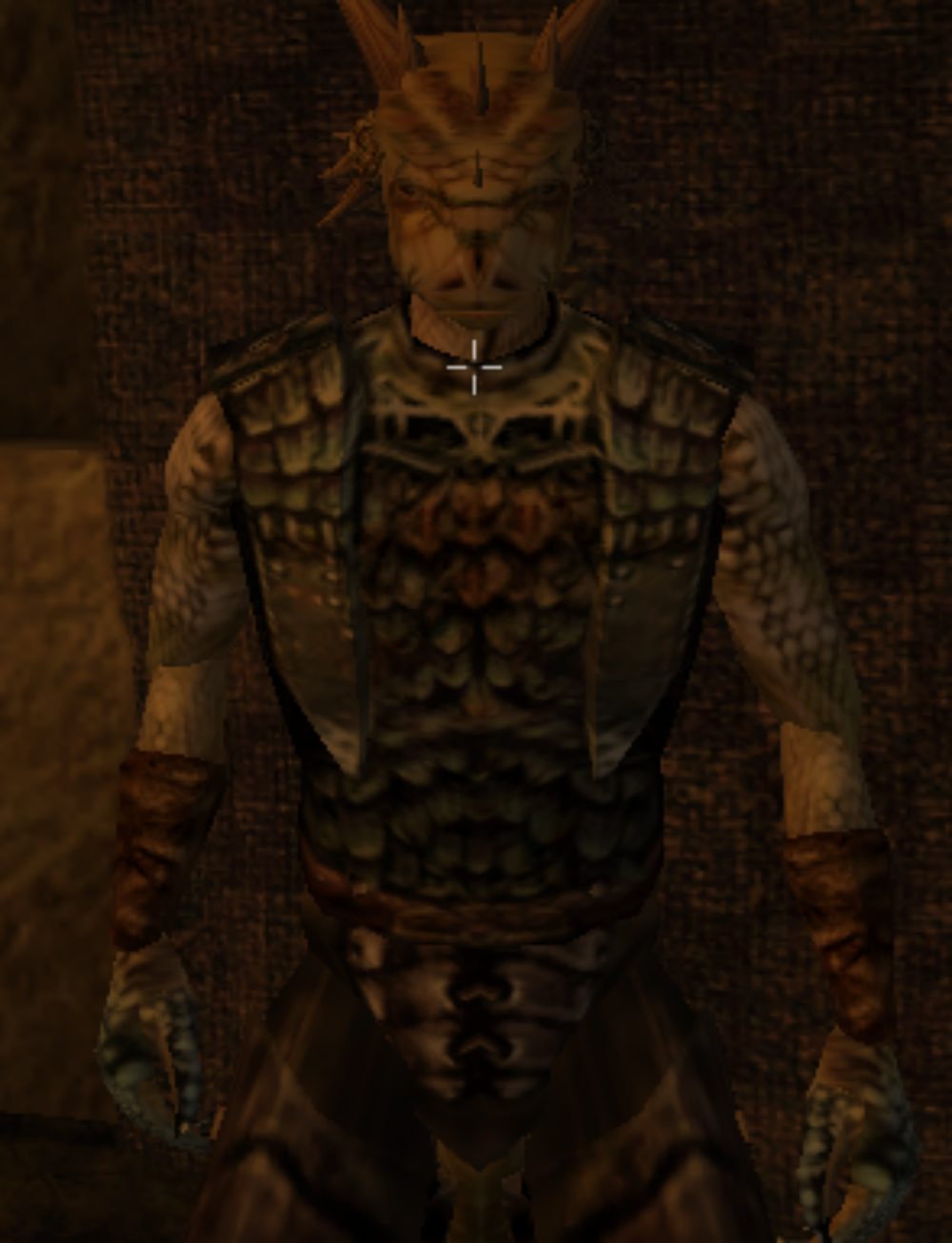 "Are you alright?" I asked him.

"They didn't hurt you, did they?" Julan's voice was full of concern as he said that.

"No, I'm fine," The Argonian said. "Aside from some words that have...bruised...my ego. But other than that…."

The Argonian rolled his eyes, if that was even possible. "Just a gang that likes to roam this part of the city and torment poor, unfortunate souls like me. But enough about that. You have business with me, yes?"

"Caius sent me," I said quickly.

Huleeya nodded. "take me to Jobasha's Book Shop. There, we will be able to talk."

Huleeya lead Julan and I to the bookshop across from the Cornerclub. When we arrived, Huleeya talked about what he knew in rather hushed voices.

The Argonian handed me an envelope.

"Here is a summary for Caius, but ask your questions, and I'll answer in detail," Huleeya said, giving me a toothy grin. I turned to see Julan browsing the bookshelves in the store. At least he wasn't there to remind me what a disgrace it was that Caius needed the information.

"Do you know anything about this Sixth House cult?" I asked.

"Well, thank you for your time," I said, then went to go get Julan so we could go talk to the other informants.

Next, we went to see Addhiraniir, who seemed to know an awful lot about the Sixth House and told me only after I got rid of a Census agent from Cyrodiil, who was looking for her due to illegal trade she had been involved in. Then, we met Mehra Milo at the Temple. She was a kind, young Temple priestess but seemed frightend when we arrived, and dragged us to the back of the library, and gave us a copy of the Progress of Truth for Caius.

"Those Ordinators had better leave her be," Julan had said once we left the Temple.

I had to agree with him there.

"We need an Ashlander informant," Caius said a week later when I went to visit him.

I suddenly thought for a moment.

"What about Julan?" I asked. After all, Julan was an Ashlander. He could be the informant! Caius only snorted and shook his head.

"A reliable Ashlander informant," he said stiffly, "not some random ragtag you picked up along the road. I have heard of a fellow in Ald'ruhn named Hassour Zainsubani, an Ashlander who left the Wastes to become a wealthy trader. They say the Ashlanders like to give and receive presents."

I made a mental note to ask Julan about it later. Caius handed me more gold.

"Take these 100 drakes," he instructed. "Find out what Zainsubani likes, and get him a gift. Then give him the gift, and see if he will tell you about the Ashlanders and the Nerevarine cult. Then report back to me."

That was when I left the house again.

"Hassour Zainsubani?" Julan asked when I told him. "I think I met him before...at the inn. He's decent enough."

A few days later, we arrived in Ald-ruhn. The city was still as dusty as ever, but I knew better than to breath in the dust this time. In fact, this time I wore something to conceal my face from the dust, and took it off when we arrived inside a bookstore, because apparently Zainsubani liked books. I bought Ashland Hymns at Julan's suggestion. Then, we headed to the inn. I hadn't been there since I left with Julan weeks ago.

"I thank you," Zainsubani said while taking a sip from a leather flask. "You have behaved courteously, and I am inclined to help you. So, Caius sent you did he?"

I nodded. "He wants some information on the Nerevarine Cult." As if he doesn't have enough information already.

I nodded, and decided to rent a room for the night. I was tired. It had been a long day and I needed some sleep.

The long corridors appeared again, and the girl kept walking, opening more doors. Then, a tall, familiar figure wearing a golden mask appeared again. His grin frightened her to the bone.

"Who are you?" She demanded.

Just then, his hands started to move towards his mask. He was about to take it off...she was going to see what was underneath…

I suddenly awoke, sweating and gasping for breath. I sat up to see Julan sitting on the chair across from the bed.

"Are you alright?" He asked.

I gave him as fake a smile as I could. I didn't want him to worry about me.

The next day, we arrived back in Balmora by the late afternoon. After a nap and a bath at the Eight Plates, Julan and I went back to see Caius. It was four o'clock and it looked as if it was going to rain. I wasn't about to leave Julan out in the rain, especially in Morrowind, considering how brutal the rain could be. So I would just hand Caius the notes and leave.

"Thanks for your report, Ulina," Caius said when I attempted to hand him the notes. "But keep Zainsubani's notes on the Ashlanders. You'll need them. I'm promoting you, and sending you to the Urshilaku camp to speak with Sul-Matuul and Nibani Maesa."

To an Ashlander camp? I thought. Great! Just great!

"I'll set off first thing in the morning, then," I told him, turning to leave. But before I could, Caius's voice stopped me in my tracks.

"Ulina, wait," Caius said. I turned around, resisting the urge to show my annoyance. "Before you go, I think it may be time to tell you what's going on."

I raised my eyebrows.

He cleared his throat. "The Emperor and his advisors think you have the appearance of meeting the conditions of the Nerevarine prophecies."

That was when I shook my head. No...no, Julan's the Nerevarine. I can't be. It's just not possible! I have parents!

"...that's why you were pulled out of prison on his Majesty's authority and sent to me," Caius continued when I didn't answer, "so you could satisfy the conditions of the Nerevarine prophecies and become the Nerevarine."

I wanted to scream at this news. It was absolutely ridiculous. Instead, I said, "with all due respect, Caius, I think this is a big mistake. For the most part, I have parents. I know who my parents are!"