I must have passed out, because when I woke up I was lying on the bed in Caius's house. I didn't remember when I passed out, though. My skin still itched, my throat still hurt and I still had Corprus. Dammit.

"So, you're awake," Caius said. "And you've compromised your situation to this young boy here. Even though -"

"Caius," I said sharply, then regretted it immediately, mostly because of my throat. "Now's not the time for that."

I saw him nod, and then heard him clear his throat.

"With Dagoth Gares dead, the Sixth House shrine is no longer a threat," he said to me. "You've more than earned a promotion to the rank of Traveler. I'm very worried that you have corprus disease. But I have some good news in that department."

Good news? How was there good news? I was more than likely going to either die or go insane.

"I canvassed my informants for possible treatments, just in case you contracted the disease during your mission. I learned from Fast Eddie that your best chance of getting cured is Divayth Fyr," Caius finished.

"Divayth Fyr?" I asked, making sure I heard correctly. "You mean...you mean that very same -"

"Yes, that same Fyr," Caius replied. "He runs a corprusarium for people who have the disease and he's our best bet on you being cured. You don't have to say anything to him about your parents - just see what you can do about getting cured."

I nodded solemnly, not at all excited about the prospect of meeting the man who had my mother and brother die in his care. I thought I saw Julan scowl, despite the fact that my vision was also fading then.

"Here," Caius said to him. "Take this Dwemer artifact and 1000 drakes, and go to Tel Fyr. Divayth Fyr will like the Dwemer artifact. A gift may sweeten his disposition. The gold is for expenses. And here're a couple of Levitation potions. I hear you'll need them in Telvanni towers, because wizards don't use stairs. So get moving, and get Ulina's corprus disease cured. Then hurry back. I think I know how to get the lost prophecies Nibani Maesa asked for."

"You never told me about your parents," Julan said as we walked along the streets of Bamora. Well, more like he was walking and supporting me.

I almost fell onto the ground, but Julan helped me up. Several citizens and guards looked at me with a mixture of pity and disgust. I heard muttering and hushed conversations. I was angry then; I didn't want their pity.

"Come on, Ulina, we'll be there eventually," Julan said. "Just...take it easy, alright." 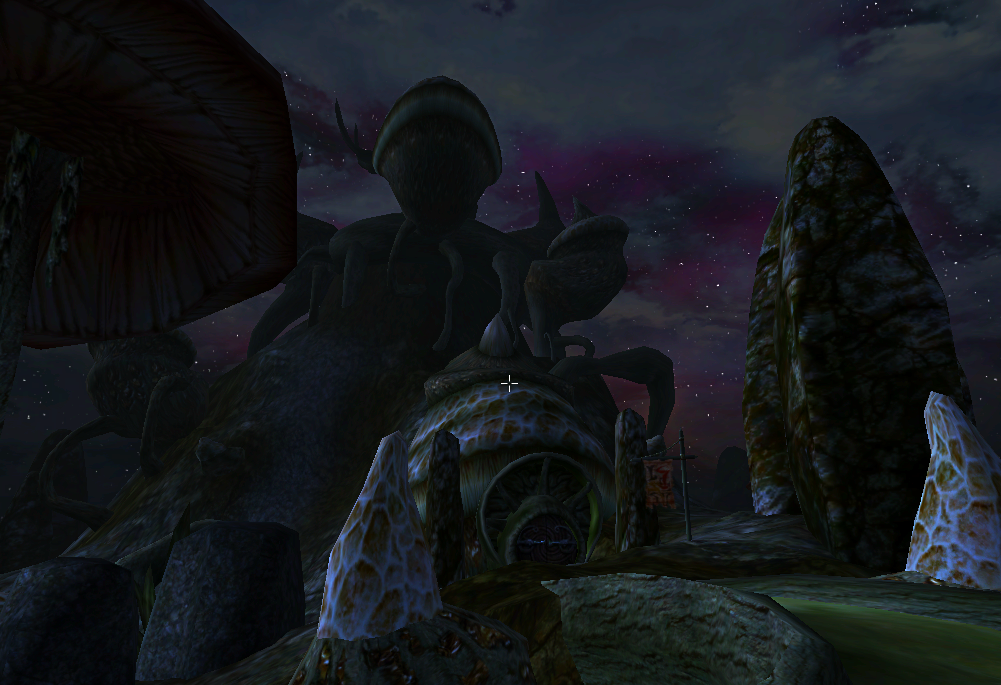 Tel Fyr wasn't the first Telvanni tower I had seen, where the wizards lived in giant mushrooms. However, it was the first time I had actually been inside one.

"I always hated these towers," Julan muttered under his breath as we pulled out the potions. "I mean, it's like the Telvanni think they're too good to use the stairs."

I saw nothing in reply, but swallowed the levitation potion. We floated up to the top floor, and saw an older Dunmer wizard who scowled when he saw us.

"Well now, what have we here?" He asked. Supporting me the best he could, Julan moved forward towards him.

"Are you Divayth Fyr?" He asked.

The wizard nodded. "Yes, I am." He glanced at us both. "Say, boy...that's an interesting dwemer piece you have."

"It's a gift for you," I said. These were the first words I had actually said since I arrived. Julan looked at me before handing the dwemer piece to Divayth Fyr, who inspected the piece for several minutes.

"A gift? For me?" Divayth Fyr didn't look shocked in the least. "How thoughtful. And shrewd. I suppose you know I am a collector. And that such a gift is bound to please me. I congratulate you on your diplomatic skills."

"You're welcome," I muttered, making sure he couldn't hear me.

"So, why have you tried to butter me up?" Fyr asked. "Come to consult the great Divayth Fyr? You have the divine disease? Want to plunder the dungeon? Or leer at my daughters?"

I exchanged looks with Julan. The divine disease?

"The magical principles of corprus disease are elusive and miraculous, far more subtle and powerful than any conventional sorcery or enchantment," the wizard said. "I'm persuaded that it is in some manner the curse or blessing of a god. Perhaps both a curse and a blessing. The victim, of course, cannot appreciate the marvelous nature of corprus. It saps the mind and destroys the body."

Better to let me die now, I thought. 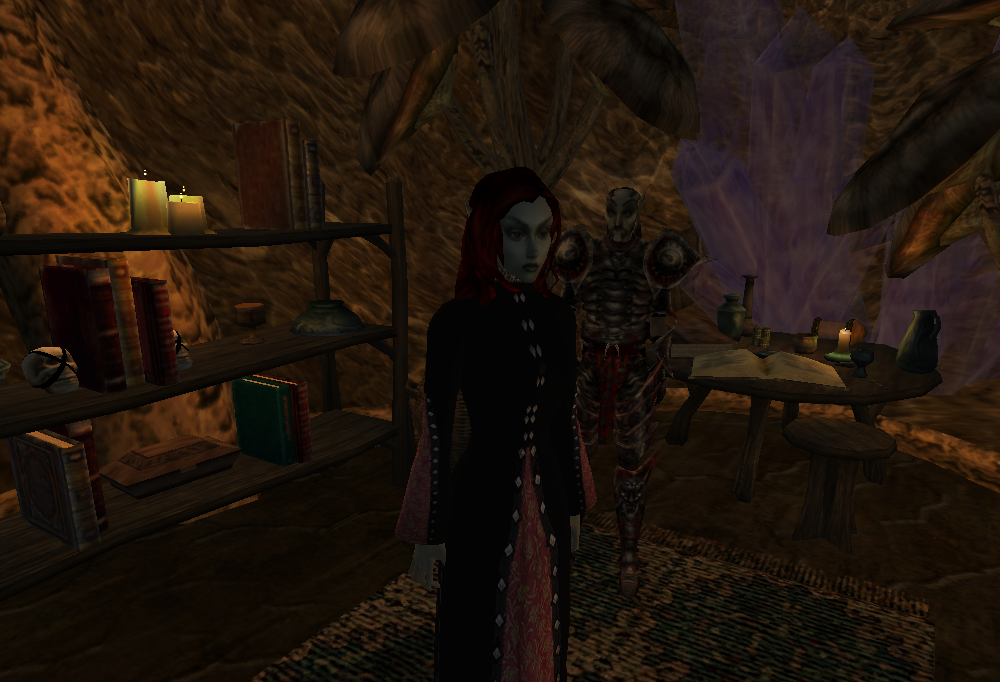 "...but to a wizard, it is a profound and glorious mystery, a riddle worth a long lifetime of study," Divayth Fyr finished.

"I have corprus disease," I blurted, then regretted it. I should have been more careful saying such a thing. Fyr looked me up and down and nodded.

I glanced at Julan for confirmation, and he nodded slightly.

"...I've always thought, 'maybe I have the Nerevarine down in my Corprusarium, and I don't even know it.'" The wizard chuckled. "The Nerevarine is a fat, disgusting corprus monster, and mad as a marsh rat. Wouldn't that be funny?"

"Look, I may be the Nerevarine," I blurted again. Has the corprus addled my brains? Fyr gave me a smile; I wasn't sure if it was genuine or not. Probably not.

"So. You think might be the Nerevarine," the wizard said slowly. "Means nothing, of course. Corprus victims have all sorts of delusions. But... let me think…"

I sighed. Most people would think I was delusional now, even though I knew I wasn't/

"I've got a potion. In theory, it should cure corprus," Fyr said. "It doesn't work, though. In fact, it'll probably kill you. Killed all my test subjects. But you've got nothing to lose."

I heard Julan let out a disgusted sigh.

"Yes. But before I give it to you, I want you to look around below in the Corprusarium," Fyr said. "You should know what's in store if you don't take the potion. And while you're there, I want you to pick up a pair of boots from a victim, calls himself Yagrum Bagarn. My oldest patient. Handy fellow, fixes things for me. Bring the boots back, and then you can have the potion."

I looked towards Julan.

"I think you should stay here," I said to him.

"She's right," Fyr interjected, "the inmates probably won't attack her. You, on the other hand…"

I made the move to leave before Julan could protest again.

When I entered the Corprusarium, an unpleasant smell caused me to wrinkle my nose. At least my sense of smell still worked, I thought as I kept walking, holding onto the walls to keep my balance.

"I am Vistha-Kai, Warden of the Corprusarium," a voice said. "I am here to warn you: do not harm the inmates. If you come to plunder the dungeon, you must endure their attacks, and take your chances with me, their Warden and Protector."

It was starting to hurt to even speak; the disease was getting worse!

I heard the sounds of the door opening. Vistha-Kai nodded towards the door and I went through, avoiding the inmates at the far end of the room, instead opting to open the door ahead of me.

The room was filled with inmates, and up ahead I saw an older Dunmer woman playing a drum, with some of the inmates sleeping around her. No doubt she's one of Fyr's daughters. Beside her was a strange Dwemer contraption and sitting on it was - 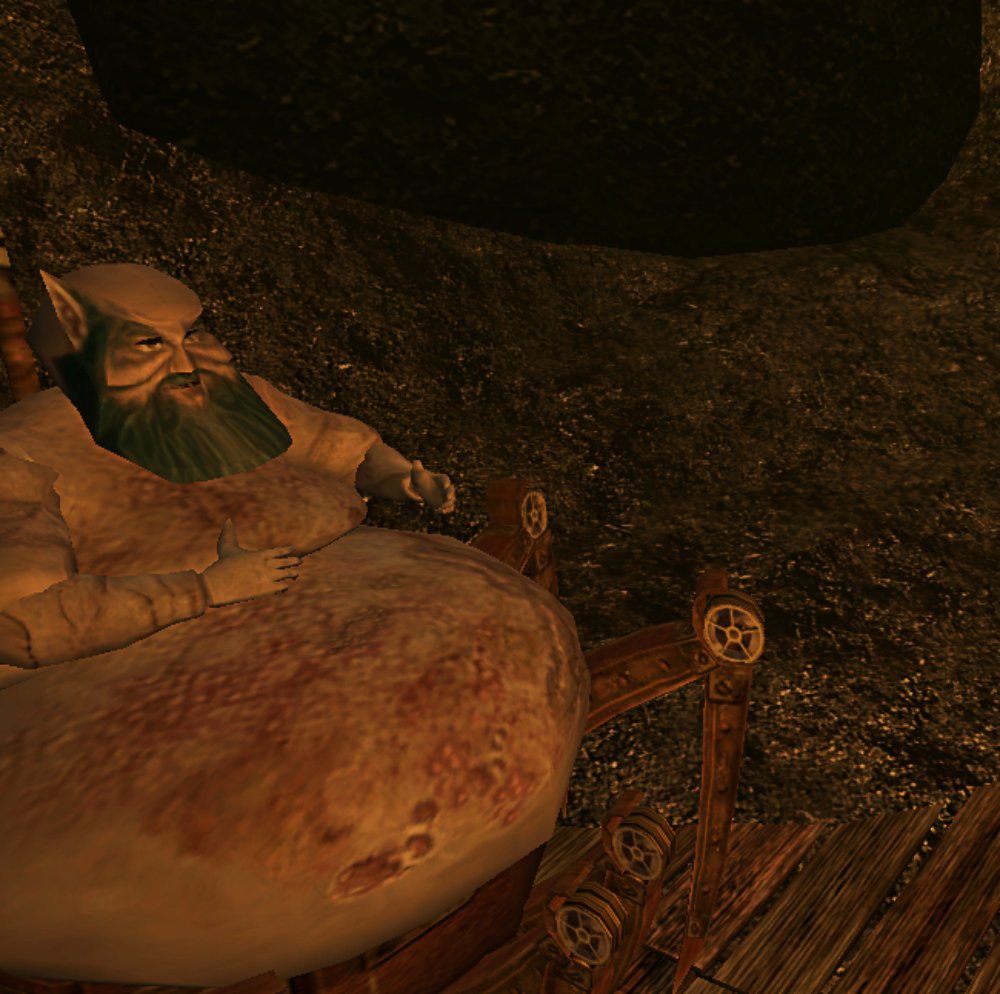 "You're here for the Dwemer boots," he guessed, and I was astounded by how accurate he was. "Tell my gracious Keeper that I have done what I could. Only a Dwemer magecrafter could have done so much. But only idiots could have created these boots. It shames my race that we must be judged by the works of such lack-wit blunderers."

I raised my eyebrows. "Your race? What do you mean?"

"I'm the last living dwarf," Yagrum said. "Or, at least, that is how I like to style myself. I haven't met any others. Once I was a Master Crafter in the service of Lord Kagrenac, chief architect of the great Second Empire freeholds, and the greatest enchanter of his time. I could not match the genius of Lord Kagrenac, but what he could envision, I and my colleagues could build. All of that is gone forever. I still retain my cunning, but my hands and eyes fail me, and my memories have long faded. My only consolation is each day to mock the gods who destroyed my race, and condemned me to this bleak existence.

"Oh, look at me, rambling," Yagrum said, "get those boots to Divayth."

"No boots, no potion," Fyr said when I arrived. I already knew this and handed the wizard the potion. Fyr smiled and then grabbed a small, light blue bottle from his desk behind him.

"And now, I'll give you the potion, on the following condition: you must drink it here, before my eyes," It sounded like a reasonable enough request. "It should act immediately, and I need to observe you very carefully. Agreed?"

"Agreed," I said. I took the bottle and poured the contents into my mouth, swallowing it in one gulp. Then, there was a searing pain that I felt all across my body; it felt as if someone was ripping my skin off and tearing out my insides.

"Ulina, are you alright?" Julan asked. I heard the panic in his voice. The potion is killing me.

"Goodness... Good grief! Look! Look! It's... WORKING!" The wizard cried. Soon, the pain stopped and I was able to stand up properly again.

I was able to see again.

I was able to hear again.

My skin had cleared up.

"By Mephala, Ulina!" Julan exclaimed. "You look like your old self again!"

"Remarkable," Fyr managed to say. "Let me check your skin... your eyes... your tongue... Amazing. I think it worked. No sign of the disease at all. Of course, you still have corprus disease, just like I planned."

"All your symptoms are gone, but yes, you still have Corprus." Divayth Fyr started scribling on a piece of paper. "That makes you immune to diseases and...who knows? Maybe you're immortal! It's absolutely marvelous. I'll go try it out on some of the more desperate inmates. But I'll answer any questions you have before you go."

I didn't have any.

"Ulina, you have no idea how glad I am you're OK," Julan said to me while on the way to Sadrith Mora. "I thought I was going to lose you."

I smiled and kissed him.