"Do we have to go to Buckmoth?" Julan moaned as we hiked up the hill. I sighed, trying my best to keep the ashstorms out of my eyes. It had been awhile since we had been in this part of Vvardenfell.

"Yes," I said firmly. "And I explained why; Caius said that one of the soldiers here would explain more about the Sixth House base."

I already knew this; Julan had explained how much he hated the Empire and their influence to Morrowind, and I did as best I could not to take it personally. I had grown up in Cyrodiil after all.

Most of the Imperial soldiers I asked directed me to Raesa Pullia inside. Raesa was a tall, Imperial woman with dark brown hair, brown eyes and a skinny body. She was wearing better armor compared to the other soldiers and seemed to have an air of authority.

"Come on," I said to Julan, grabbing his hand and leading him towards the woman, who gave us a curious look.

"I'm Raesa Pullia, Champion of the Legion garrison here at Buckmoth Legion Fort. And you are?" she asked, a hint of annoyance creeping into her voice.

In that moment, Raesa's expression softened. "Caius Cosades sent you, didn't he?" She asked. "Caius says you're the one to handle this Sixth House base near Gnaar Mok."

"I do wish he had sent someone more capable…" She muttered. I felt a torrent of anger, but said nothing. "Only one trooper returned. He died soon after, horribly disfigured with corprus disease, and out of his wits. In his ravings, he spoke of a cavern on the coast - he called it 'Ilunibi.' It's not on our maps; try asking locals in Gnaar Mok. They fought with cultists and disfigured man-beasts - corprus monsters, I think. They fled the attackers and got lost in the caves. Then they ran into a half-man creature named Dagoth Gares."

Ilunibi? Dagoth Gares? I mentally made a note of it. Seeing the shocked looks on my and Julan's faces, Raesa continued.

"This Dagoth Gares slew the rest of the patrol, but spared the one trooper. He told the trooper he was being spared, so he might tell others that 'The Sleeper Awakes,' and 'The Sixth House has Risen,' and 'Dagoth Ur is Lord, and I am his Priest,' and 'All will be One with Him in the Flesh.' The trooper awakened outside the caves and returned here. We couldn't recognize him, and he didn't respond to questions... just kept rambling on like a madman until he died."

Raesa seemed distant then, so I snapped my fingers together and she came back to Nirn. Either way, she looked frightened remembering. I was frightened, too. Mostly because I was remembering my encounter with that strange man soon after I met Julan.

"That's what the dead trooper called the sea caverns where he found the Sixth House base," she said. "It's not on our maps, and no one here has heard of it. Maybe the locals in Gnaar Mok can tell you where to find it. Or you may have to search for it yourself."

After a few more words, Julan and I left the fort. This time, I was careful not to breathe in the ashstorms.

"Ulina, I have a really bad feeling about this," Julan said suddenly. "About what in Oblivion is going on here, I mean."

"No," he snapped. "I already made it pretty clear I'm going with you."

Gnaar Mok was a small town on a small island an hour or two away from Buckmoth, and Julan and I made it there around midday. After asking several locals, a jumpy Bosmer told us about Ilunibi, only a little bit of a walk away from town. We thanked him, and then set off.

The trip to Ilunibi meant treading through a large, swampy lake filled with scribs and buzzing flies. I could have sworn I trod of something else unpleasant - I wasn't sure what it was, but I didn't want to know. I then started uttering a few profanities under my breath, as did Julan when he stepped on a Mudcrab.

"Godsdammit," he yelped. "How much longer do we have before we find the place?"

"Not much further now, I hope," I replied sheepishly.

'Not much further' turned out to be walking in circles for another twenty minutes before Julan eventually found a rickety wooden door with the words "ILUNIBI, CARCASS OF THE SAINT" carved into the stone outside it. 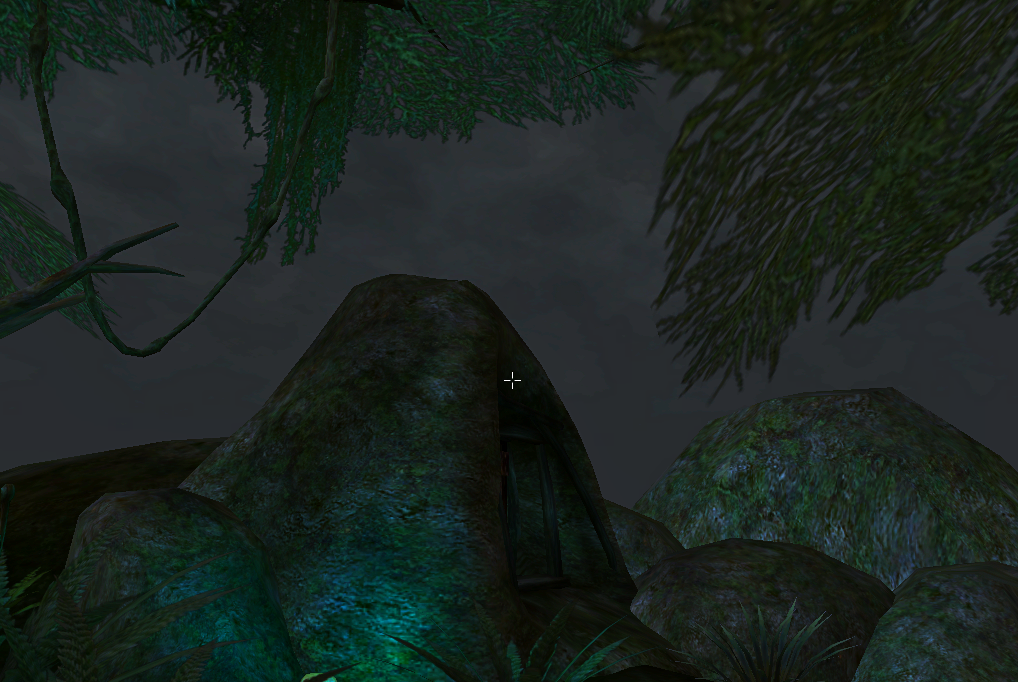 "I think we've found it," he said grimly, opening the door. I stepped in afterwards, not entirely sure of what was inside.

"I've said it before, and I'll say it again, Ulina; I have a bad feeling about this," Julan told me.

"I do too," I responded, hearing the shaking in my voice. "But again, I don't have any other options here."

The next chamber turned out to be "ILUNIBI, MAROWAK'S SPINE."

"Just who in Azura's Star is Marowak?" Julan asked.

"You know what, don't answer that," he said, "I probably don't even wanna know," then he opened the rickety wooden door.

Marowak's Spine was full of Sixth House monsters and ash slaves. I wasn't expecting any of them, and wasn't at all pleased to see them. I ended up whacking several of them with my sword, and Julan cast several Destruction spells. This seemed to be the same pattern for the next two chambers, the Sixth House occupation becoming more and more apparent as we went deeper into the cave. The last one was "ILUNIBI, SOUL'S RATTLE" and there were no more ash monsters.

"It's rather quiet in here, don't you think?" Julan asked. I nodded, then went to sneak around the room, before a vice that made the hairs on the back of my neck rise. 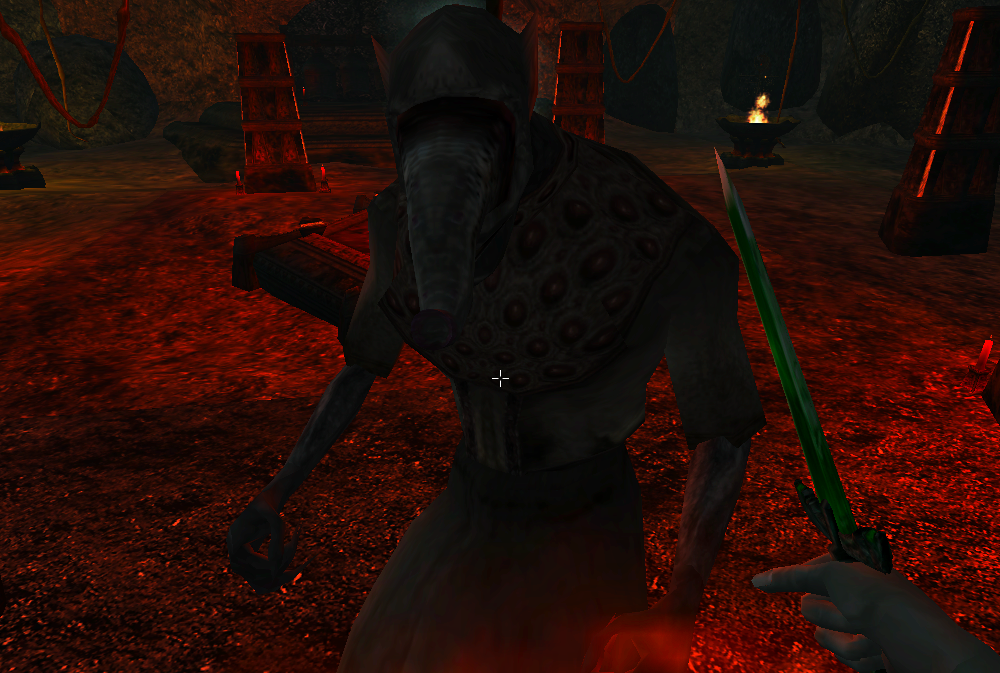 "Or, Ulina Therayn as you call yourself," The voice continued, I turned around to see something - at that point, I wasn't sure what it was - standing at the very end of the room.

"Ulina, we need to get out of here now," Julan's voice was filled with urgency. "This was a part of my dreams! WE NEED TO GET OUT!"

But I felt as if I had been glued to the spot; my blood had run cold.

"Who are you?" I snapped at the figure who was now only a few feet away from me.

"I am known as Dagoth Gares, priest of Ilunibi Shrine, and minister to Sixth House servants. My Lord, Dagoth Ur, has informed me of your coming. I wish that this time you had come to honor your Lord's friendship, not to betray it."

Whatever that thing was, it was smiling. That sight alone was frightening.

I turned to Dagoth Gares.

"Whatever you want to say, say it already!" I yelled.

The monster shook his head.

"Lord Dagoth gives me these words to say to you, so you may give them thought. 'Once we were friends and brothers, Lord Nerevar, in peace and in war. Yet beneath Red Mountain, you struck me down as I guarded the treasure you bound me by oath to defend. But, remembering our old friendship, I would forgive you, and raise you high in my service.'"

I felt a lump in my throat and resisted the urge to swallow. I would never join Dagoth Ur. No, never...

"My Lord Dagoth bids you come to Red Mountain. For the friendship and honor that once you shared, he would grant you counsel and power, if only you would pledge that friendship anew. I am not your Lord Dagoth, yet I, too, would say to you... Do you come with weapons to strike me down? Or would you put away your weapon, and join me in friendship?"

"Forget it," I said instantly, and then regretted saying it. I should have given what I said a bit more thought, and given myself more time to prepare. The monster started aiming several different spells at us, many of them deadly. I ducked and then thought of something; kicking the monster and tripping him up. I did just that. It landed on it's back and I unsheathed my sword, stabbing it's chest. I let out a sigh of relief, but then yelped when the thing grabbed my arm. I saw that frightening smile again and resisted the urge to scream.

"Even as my Master wills, you shall come to him, in his flesh, and of his flesh," it said, then died. All of a sudden, I felt bums start to swell on my skin and my throat start to close up, making it hard for me to breathe. Julan rushed towards me, smiling

"It's dead! We did it! Praise Azura!" He cried, and moved forward to hug me, but I backed away. "Ulina, what's wrong?"

"Don't touch me!" I cried. "Otherwise you might catch whatever I have."

"Sheogorath! You have Corprus disease! That bastard cursed you with Corprus!"